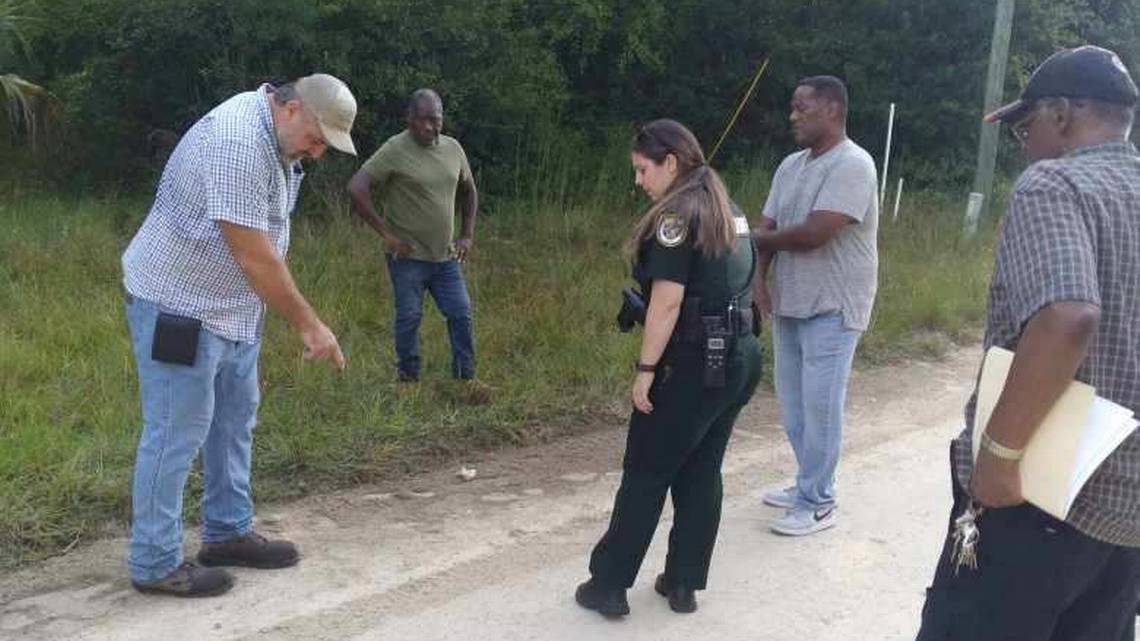 A member of Dr. Marvin Dunn’s group shows a Levy County Sheriff’s Deputy skid marks left behind during an alleged confrontation with a neighbor. Provided by Marvin Dunn

One of the state’s most prominent Black historians said he was targeted in a racially motivated altercation in Rosewood, a small North Florida city that was almost wiped off the map during infamous race riots a century ago. Dr. Marvin Dunn — a professor emeritus in psychology at Florida International University who has written several books about Florida’s troubled history on racial issues — said he and a small group were surveying a five-acre property he co-owns in Rosewood earlier this week when a white neighbor began questioning their intention. Unhappy with the response, Dunn said the man got into a white Ford F250 pickup and made several passes at the group repeatedly yelling the N word and almost striking Dunn’s son, Doug Dunn. One of the seven other members of his group called the Levy County Sheriff’s Office, which visited the scene. The historian, who lives in Miami, also said he reported the incident, which he called a hate crime, to the FBI.

“My neighbor comes out in a pickup and says ‘What’s going on here?’” Dunn said. “Then he makes a U-turn out of his driveway, comes back at us and almost kills my son. I was afraid to be on the property. So I came back to Miami.” The man who contacted the sheriff’s office was Bobby Prevatt, owner of a land-clearing company called Prevatt Earthworks. He said the group was on the roadway discussing fencing on Dunn’s property when the man who threatened the group pulled up in his truck and asked “What are you f*****g N*****s doing out on this roadway?” Dunn, who called the man “sir” according to Prevatt, said he was on his own property and doing no wrong. “No one was really threatened at that point, other than him being a rude and belligerent son of a bitch,” Prevatt told the Miami Herald in a phone interview. Prevatt said the man repeatedly used the N word and said the group had no right being there, before retreating to his home across the street. A few minutes later, Prevatt said, the man got back into his truck, revved the engine and shotgunned out of the driveway as fast he could, nearly hitting Doug Dunn.

“He accelerated with everything he had. He was probably going 50 miles per hour by the time he reached us. He was only inches from him [Doug],” Prevatt said. “It had me concerned enough that I put my hands on my personal defense to defend myself. I felt endangered for my life and the people around me at that point.”

Dunn said he has co-owned the land, nearly five acres off State Road 24 in Rosewood, for well over a decade. He said he had arranged to meet with Prevatt Tuesday about clearing the land for an event he plans next year to mark the 100-year anniversary of the Rosewood Massacre. 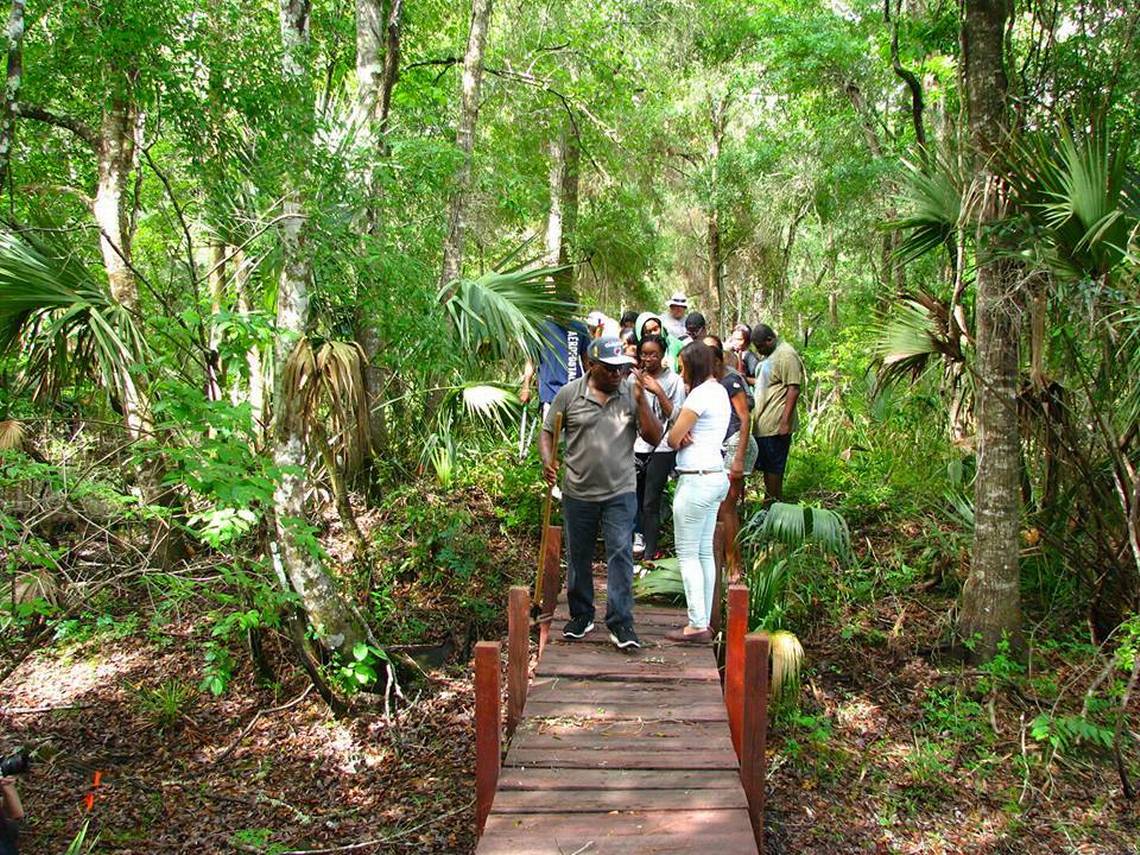 In the past, Dr. Marvin Dunn has guided Students from the Gainesville area on a tour through the 5-acre property he owns in Rosewood. The old Seaboard Airline Railway used to run through there. Provided by Marvin Dunn

The small town, not far from Florida’s Big Bend and the Gulf Coast and about 50 miles southwest of Gainesville, served as whistle-stop along the Seaboard Airline Railway until it was left in ruins after riots broke out in January 1923. The unrest began when a Black resident was lynched after a group of whites accused a Black drifter of raping a white woman in an adjacent town. Several hundred whites stormed the city and burned it to the ground.

Despite its notorious past, the city’s history was largely forgotten until the 1980s. Though the official death after the riots was six, it’s believed that as many as 100 people or more were killed during the rampage that saw all the city’s buildings burned to the ground. It is now recognized as one of the worst racist attacks on a predominately Black community in U.S. history.

Dunn, 82 and the son of a Volusia County fruit picker, has written several books about Black history in Florida and in Miami. More recently, he has taken to Twitter and other forums to lash out at what he brands as racist education policies supported by Florida Gov. Ron DeSantis. He took to the social media site again to comment on the Levy County incident.

The historian also took several pictures of the aftermath of Tuesday’s incident, including some of a sheriff’s deputy surveying skid marks on the roadway. He said he was told no incident report would be available until at least Friday, when the responding deputy returns to work.

Levy County Lt. Scott Tummond confirmed one of his deputies visited the property on Tuesday morning. He also said records show a report on the incident has not yet been completed and likely will be when the deputy returns to work Friday.

The officer also said the man alleged to have threatened the Dunn group with his truck is not named in any of the available paperwork. Dunn said he recognized the man, but didn’t know his name.

“It looks like they were cussing at each other, back and forth,” Tummond said. “And that maybe a vehicle lurched in his [Doug Dunn’s] direction.”

Prevatt, who called in the incident to Levy law enforcement, said there was no back and forth.

“Mr. Dunn was absolutely polite to the man,” said Prevatt. “There’s no place in society today for that type of thing.”