Florida Blacks in the Civil War by Dr. Marvin Dunn

Abraham Lincoln won the presidential election of 1860, hurling the resentful South toward secession. On January 10, 1861, Florida left the Union, one of the first states to do so. On April 12, Confederate forces attacked Fort Sumter, a federal fort off the coast of Charleston, South Carolina, beginning the American Civil War. Floridians had never been united on secession or subsequent support of the Confederacy; most favored secession, but a significant minority did not. Many of those who were opposed remained Unionists throughout the Civil War, and their Unionism was manifested in various ways. Some 2,000 white Floridians deserted the Confederate Army, although not all for ideological reasons. By 1864, guerilla bands of Union loyalists were roaming almost at will from Jackson County to the coast, and along the coast through Taylor, Lafayette, and Levy Counties to Tampa Bay.i

When the war began, the Union was intent upon heavy recruitment of blacks from Florida, particularly those from the northeastern section of the state. Some of those efforts were impressively successful. For example, in November, 1862, a Union expedition, moving along the coasts of Georgia and Florida had departed South Carolina with 62 black troops and, “returned to Beaufort with 156 fighting men (all colored).”ii According to the white commanding officer that led the black troops on the raid, “As soon as we took a slave from his claimant, we placed a musket in his hand and he began to fight for the freedom of others.”iii

By the end of the war, some 178,975 black troops were in federal service; 99,337 had been recruited from Confederate states, including 1,044 from Florida. These Florida recruits constituted roughly one-tenth of the black adult male population of the state. Many of the blacks recruited on Union raids were assigned to help established black regiments like the famed Fifty-fourth Massachusetts Colored Infantry, which later would see heroic action in Florida at the Battle of Olustee.iv

The use of black troops by the North did not set well with white Southerners. The commanding general of Union forces on the 1862 raid mentioned above wrote to his superiors in Washington, “It is my belief that scarcely an incident in this war has caused greater panic throughout the whole Southern coast than this raid of colored troops in Florida.”v The famed Confederate general, Pierre G.T. Beauregard, the man who opened fire on Fort Sumter, castigated the Lincoln government for its use of “members of a servile race” as soldiers, citing Napoleon’s refusal to use Russian serfs as volunteers as an example to be followed. Lincoln’s response was to call even more blacks to advance the Union Jack.vi

The raids into Florida by black Union troops fueled a white obsession about possible slave insurrections in the state. Some slave-owners withdrew into the interior of the state with their slaves. The Confederates also moved many free blacks, as well as blacks without apparent owners, into the interior and away from contact with black fighting men. The area around the St. Johns River was of special interest to both sides due to the importance each placed on the plantation slaves. The Union wanted black volunteers from the St. Johns region, and the Confederates wanted to keep the local plantation slaves pacified and out of the reach of black soldiers and free blacks. The Confederate commanding general in Florida wrote to his superiors predicting dire consequences if black Union soldiers had contact with the slaves in the region of the St. Johns:

The entire Negro population of East Florida will be lost and the country ruined . . . unless the means of holding the St. Johns are immediately supplied . . . The entire planting interests of East Florida lie within easy connection of the river; . . . Intercourse will immediately commence between negroes on the plantation and those in the enemy’s service . . . and this intercourse will be conducted through swamps and under cover of night, and cannot be prevented. A few weeks will suffice to corrupt the entire slave population of East Florida.vii

The St. Johns River became a crucial pipeline for slaves seeking freedom during the Civil War. For many escaped slaves heading north on the river toward Jacksonville and the federal forces there, the river was a conduit of dreams offering hope for a better life. Over a thousand slaves and free blacks from northeast Florida joined an assortment of Union regiments. For other slaves, the river was a dream-killer as, on it, their masters took them deep into the interior of the peninsula and away from Union troops. The flow of slaves into Union ranks caused Florida slave-owners to panic. In early 1861, the threat of federal occupation of Florida, which would certainly lead to even more slave defections, prompted criticism of Confederate training because it concentrated on military maneuvers rather than on training soldiers to perform guard-type duty designed to discourage slaves from running away.

In March 1862, when Union troops captured Fernandina, St. Augustine, and Jacksonville, the worst fears of the slave-owners were realized as runaways began appearing at Union strongholds on a daily basis. Union penetration of the interior of the peninsula was actually aided by former slaves who worked as laborers in the construction of Fort Steele, at the mouth of the St. Johns River. Former slaves also provided scouting reports of Confederate troop movements. The strong military and naval presence accompanying the Union occupation of Florida prompted more slaves to flee to Union lines. Union General Thomas W. Sherman saw the possibility of bringing Florida back into the Union by freeing the slaves of the state, arming them, and registering them to vote. As noted earlier, in order to prevent this, many slave-owners, using the state’s rivers, hurried their slaves into the interior. But sometimes the slaves were barely off the boats before they were on their way back toward the Union forces.

In early 1862, the Union policy toward runaway slaves was inconsistent. In the field it seemed to depend upon the personal views of the officer in charge at any given location and his views on the purpose of the war and the role of the armed forces regarding slavery. Despite contradictory policies, the slave defections held great promise for the Union. In the early stages of the war, Union generals concluded that the continued defection of Florida slaves (and slaves in general) meant that future additions to the Confederate fighting forces were not going to be readily available or in great abundance. The Confederates used slaves as menial labor to support troops but not as armed fighters. The defections also meant considerable crop loss resulting in a loss of money that was so crucial to the South in funding the war. Nowhere was the threat of crop loss more apparent than along the St. Johns River.

The Union blockade of Florida killed the beef trade with Cuba that had been so important to central Florida cattle ranchers. However, the ranchers found a substitute market for the sale of their cattle, the Confederate Army. By 1861, Florida beef was being used in the Confederate war effort. At first the meat went to feed Confederate troops within the state’s borders. Then, in an effort to boost the army’s beef supply, the Commissary Department of the Confederate Army in Richmond began awarding contracts to civilian agents to provide cattle for military consumption.

Jacob Summerlin, a white man, became the person in charge of furnishing Florida beef to the Confederate forces. In so doing, he played a major role in creating a business that would feed many families, black and white, in central Florida before, during and after the war. It was men like Summerlin who, by making money in the cattle industry during the war, made central Florida an attractive place for black and white migration following the war. As the industry grew in post-war central Florida, black cowboys were among the best in the business.

Few battles were fought in Florida because of its distance from Virginia and the other states directly involved in the war. Although most of the new state was untouched, key cities like Jacksonville, Pensacola, Tampa, and Key West were crucial to both sides. Federal troops quickly occupied these cities against minimal Confederate resistance. For example, a few months after Florida seceded from the Union, federal troops landed at Fort Pickens, and within days Pensacola was full of Union troops. In fact, the first major battle in Florida occurred on October 9, 1861, near Pensacola, when Southern troops unsuccessfully assaulted Santa Rosa Island in an attempt to capture Fort Pickens.

Because of this failure, Confederate troops moved out of Pensacola, and thereafter Union forces controlled the entrance to the harbor. As they left the city, the Confederates destroyed most of the town, including saw mills, lumber and brick yards, cotton bales, boats, and everything else they thought could be of use to the federal troops. Pensacola remained under Union control for the rest of the war. Many residents evacuated the area, and by 1863 only about seventy people lived there. Before the war, 2,876 people had lived in Pensacola, with blacks accounting for almost 40 percent.viii

During the Civil War, federal troops virtually destroyed the city of Jacksonville, causing whites to evacuate the city. From 1861 through 1865, Union soldiers occupied Jacksonville four times. Both black troops and white troops took part in the third occupation, in March 1863. The Union’s main reason for occupying Jacksonville was to recruit black regiments to fight for the North. According to William H. Nulty, an expert on the Civil War in Florida, the purpose of Jacksonville’s occupation was to “. . . make it the base of operations for the arming of negroes and securing in this way possession of the entire State of Florida.”ix

When Union forces withdrew from Jacksonville the third time, parts of the town were set ablaze. At first the white residents blamed the black troops, but they were later exonerated. “The evacuation of Jacksonville by the federal troops was marred by fires that sprang up suddenly in parts of the city and a number of private homes that were looted by hoodlums among the departing soldiers. The black troops were initially blamed, but news reporters who were present . . . maintained it was done by white troops in the part of the city in which they had been quartered.”x

Residents of Orlando encountered many shortages and faced financial ruin when Union forces closed the cattle business with Cuba. As noted earlier, prior to the war Orlando’s cattle business had grown because of the high demand for beef in Cuba. The cows were rounded up and driven by cowboys, some of them black, to Cedar Key or Tampa; they were then shipped to Cuba where beef was relatively scarce. The blockade of Florida’s port cities by Union forces virtually stopped the shipments to Cuba, and central Florida cattlemen began driving their cattle to South Carolina for sale to the Confederate Army.

The small population of blacks who remained in Orlando were primarily slaves who chose to be loyal to their owners during the war. Because of profits made in the booming cattle business, Orlando was one of the few Confederate communities that actually grew during the war. When the war ended, many settlers, white and black, left their war-ravished homes in other parts of the Confederacy to settle in unscathed, productive central Florida. 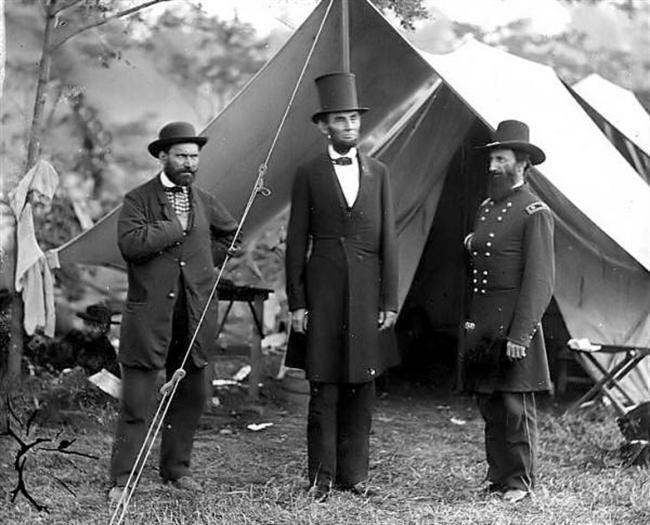 Lincoln at the Antietam Battlefield with General George B. McCellan and Allan Pinkerton who headed what became the Secret Service. 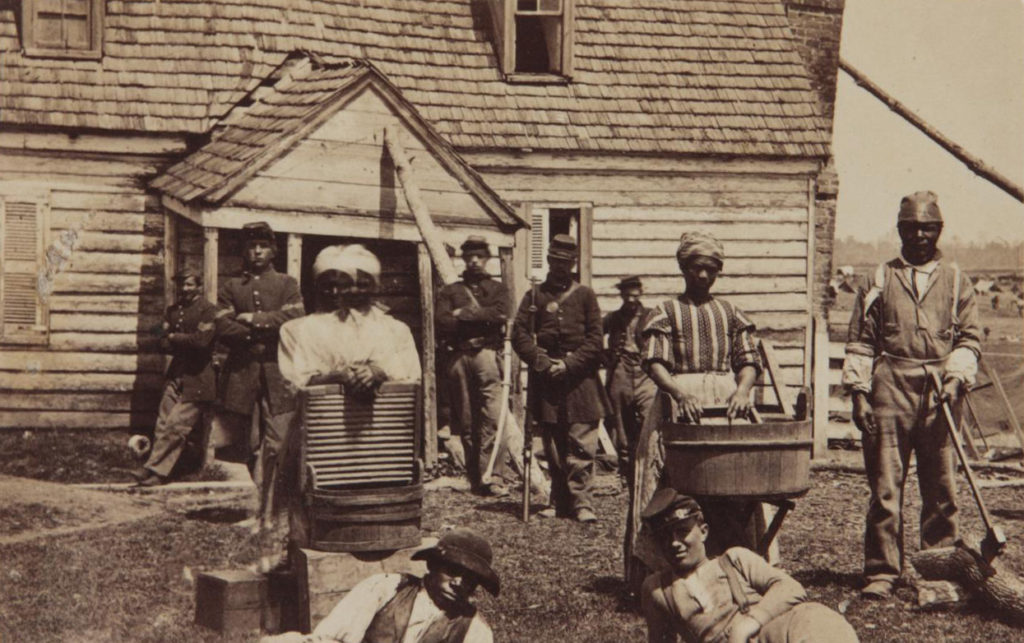 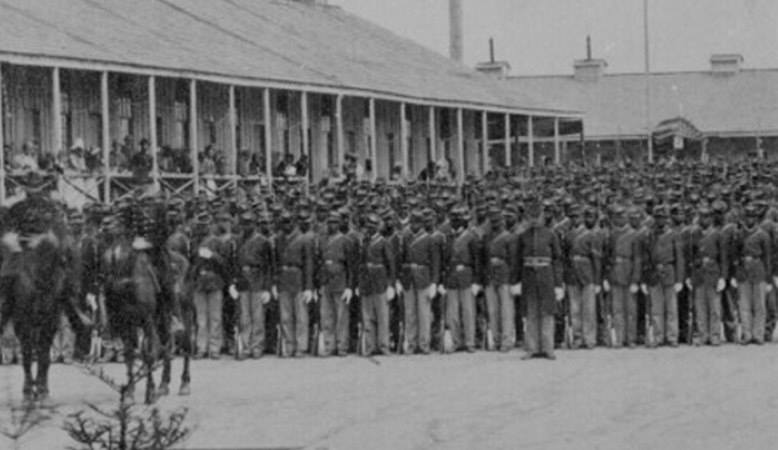 Black Union troops. Hundreds from Florida fought for the Union. 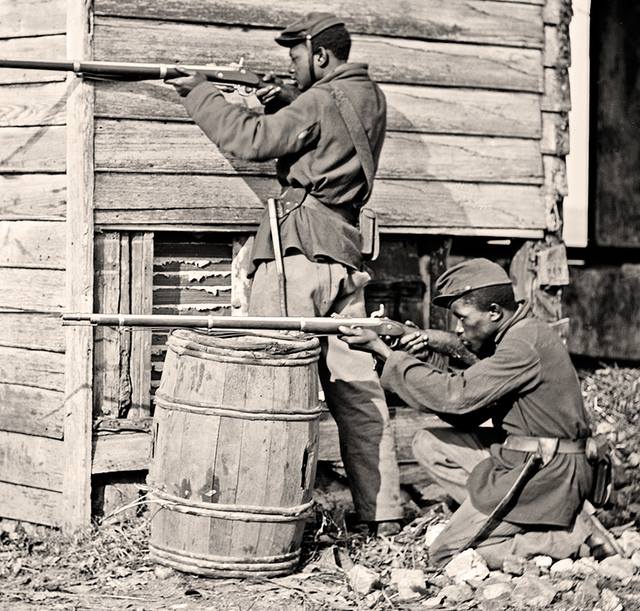 Black Union soldiers rarely gave up in large measure because some Confederate commanders ordered them slaughtered after they gave up. 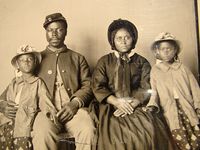 Possibly the only photo of a black Union soldier and family. Many mustered out of the service in Florida and remained there