The first use of sizable numbers of African slaves in the New World was in the construction of forts and other public buildings. At St. Augustine, the wooden fort that had been built with forced Indian labor was continuously being repaired because of poor construction and rotting wood. During the late 1500s Spain decided to build a fort that could withstand assaults from Indians, Europeans, and the weather. The Castillo de San Marcos was to be a coquina-stone fortress with outer walls twelve feet thick at the base and seven feet thick at the top. The huge coquina blocks were to be brought to St. Augustine from nearby Anastasia Island. By March 1573, however, construction of the great fort had slowed down due mainly to the unskilled Indian labor. Royal authorities at St. Augustine suggested that the Crown send 50 black slaves from Havana to work on the fort. Many of the slaves who were ultimately sent were skilled craftsmen whose expertise was badly needed and sorely lacking in the Indian workers.i

But Spain’s hold on the continent was tenuous at best and France and England were hungry. With the establishment of Charlestown by the British in 1670, English planters from Barbados challenged Spain’s right of exclusive control of the Atlantic seaboard. Unable to mount military resistance to the intrusion, Spain allowed and encouraged Spaniards to raid the English settlement. Often black slaves, whom the English had brought with them, would be taken back to St. Augustine, thus beginning a long and bitter struggle between the two countries over Spain’s harboring of escaped slaves. In addition to the slaves taken during Spanish raids on the English plantations, many slaves began running to Spanish Florida on their own, sometimes taking months or even years to reach St. Augustine. As a result, the population of escaped slaves in St Augustine, primarily from British plantations in South Carolina, began to grow almost immediately after the English settled the colony.

In 1693, Charles II of Spain freed ex-slaves and made Florida an official sanctuary, encouraging runaways from the British colonies to come to St. Augustine. Spain needed men in Florida to resist English expansionism. Black men could fight. This decree brought about the arrival of many more blacks from the nearby British colonies. Sometimes Indians and maroons helped the escaped slaves reach St Augustine. The Spanish governor of Florida officially sanctioned Florida as a haven for runaway slaves from British colonies. Fugitive slaves brought both military and civilian manpower to thinly populated St. Augustine. The city had only 1,500 residents at the time, and the British were continuingly spreading down the east coast of the continent, creeping ever closer. In only one known case did the Spanish return an escaped slave to the slave’s English masters; the rest were sheltered, instructed and baptized in the Catholic faith. Some of them married and most, if not all, were later employed for wages.ii

But as Spaniards ensconced themselves at St. Augustine sheltered beneath the powerful guns of the Castillo de San Marcus, Spain struggled mightily to retain the kingdom’s vast claims in the New World but ultimately did not have enough sons or slaves to defend what Spain called La Florida. From what later became Louisiana and Mississippi, the French pressed Spain from the west reducing Spanish claims west of the Mississippi River. To the north and east, Spain faced English colonies steadily spreading down the eastern coast of the continent. In February, 1733, one hundred and sixty-eight years after the Spanish settled St. Augustine, the English established their thirteenth colony with its border barely beyond the St. Johns River. They named it Georgia. 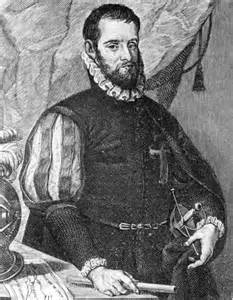 Pedro Menendez established St Augustine in 1565. At that time there were free black people already living in Florida.

The Castillo de San Marcos in St Augustine was built with the help of skilled black slaves brought in from Cuba. 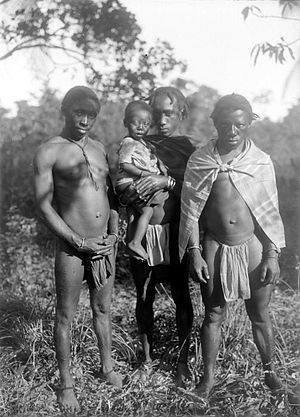 Maroon settlemenrts existed along the coasts of the Carolinas, Georgia, Florida and in the Caribbean. 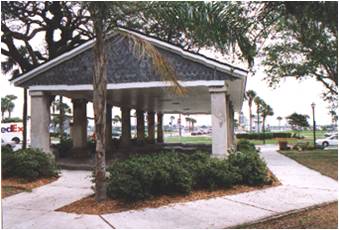 The Slave Market in St Augustine from which enslaved people were sold for centuries. 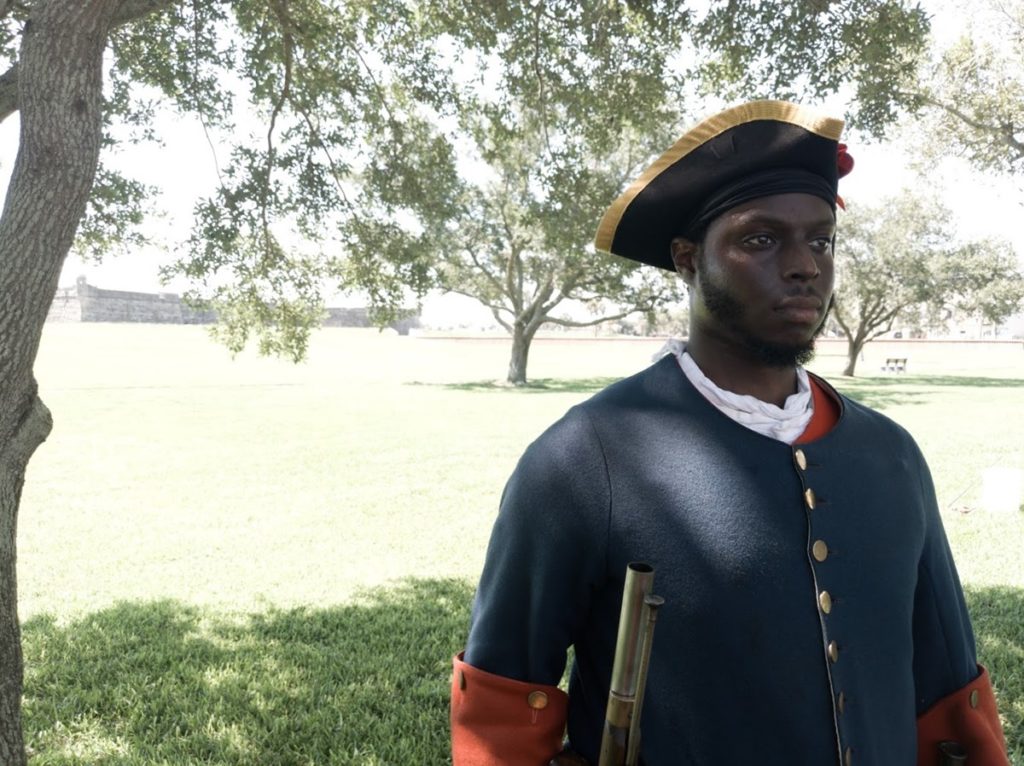 A park ranger at Fort Mose in the military uniform of that time.