The Church as Oppressor by Dr. Marvin Dunn

To fully control African slaves, it was imperative that they be separated from the religious and spiritual beliefs they held when they entered the holds of slave ships and that they be converted to Christianity. Slave-holding presented a moral dilemma for a nation founded as it was upon the principle of human freedom. The Christian Church was very helpful in resolving that conflict by defining slaves as infidels who should be enslaved for their own good. The Church helped to dehumanize the slaves by defining them as being outside the realm of humanity. Some whites did not see blacks as fully human beings and thought them to be incapable of understanding the true principles of Christianity.i

For several centuries the Christian Church, with a few exceptions among its many variations, made it the duty of Christians to deliver up infidels to Christ for the benefit of the infidel. Therefore, not only should slavers enslave non-believers, they should know that God issued brownie points for their efforts. Of course, this position benefited the Church too, after all, how was the preacher to be paid if not from the largesse of the planters and other powerful whites who controlled the purse strings of the individual churches?

Whites generally saw themselves as a civilizing influence upon the blacks who, they thought, would revert to the primitive non-Christian practices brought to the New World from Africa if whites did not exert their paternal oversight. Since the conversion of Africans to Christianity was seen as a religious duty, there were no moral contradictions in the keeping of slaves and the doctrines of the Christian faith. According to the late historian Dr. John Hope Franklin, “the Church was never a powerful voice for freedom.” He said the Church was a willing instrument in the subjugation of blacks during slavery. According to him, “slaveholders could sleep well at night knowing that the keeping of slaves was approved by the Church.”ii

During the antebellum period most slaves went to church with their owners. Following regular services, the ministers held special services for the slaves. Slaves were taught from the pulpit that God wanted them to obey their masters and mistresses and were told that their reward for good and obedient service would be found in heaven. Thus, for blacks, suffering on earth was to be seen as a necessary ticket to the afterlife, where, as winged-beings they would float to heaven and live forever drinking milk and honey and walking on streets paved with gold.

The view that God wanted one to suffer for no apparent reason was probably alien to Africans but, from the slavery era forward, a drumbeat for black submission to suffering on earth for greater rewards in heaven rolled from the pulpits of churches, white and black: the more one suffered on earth, the greater the reward would be in heaven; self-denial is a virtue; if it feels good, it’s bad; expect no reward for your earthly toils. Of course, their masters and mistresses did not have to die to get their reward. As far as the slaves could see, whites had their heaven on earth at the expense of the slaves.

Even as slaves adopted and practiced Christianity, this did not hold the promise of freedom. Slaves were seen as perpetual children requiring the moral guidance of whites, if for no other reason than the innate inferiority of blacks to whites. Blacks were generally considered by whites to be inhuman, at least not as human as the whites considered themselves to be. Many southern whites did not believe blacks were capable of love, not to mention romance, or any of the gentler human emotions. The churches of the era did little to dispel these beliefs and did much to enhance them. Despite the drumbeat from white preachers that God wanted slaves to obey their masters, the slaves used religion as an instrument of hope for freedom and saw God as their savior.

The religious indoctrination of slaves to believe that their purpose on earth was to work for whites and that suffering and self-denial are Christian virtues was based upon the so-called Pauline Dictum (Corinthians Chapter 14: verse 34) which was used by slaveholders to teach slaves to be obedient to their masters. This dictum also required women to be silent in church matters. Many former slaves recalled hearing sermons based upon this view preached by white ministers. Douglas Dorsey, a former Florida slave, recalled such sermons in which he was told to have no other God but his master and mistress “as we cannot see the other God, but you can see your master and mistress.”iii If a black preacher took up the message that obedience to masters was God’s will and denial of earthly goods is a Christian virtue, he might be given spiritual access to the slaves. When black churches were allowed, white preachers served the black congregants, preaching relentlessly to slaves that God wanted them to obey their masters and mistresses.

Bolden Hall, Susan Epps and Margrett Nickerson, former slaves, recalled how slaves were treated regarding church. Bolden Hall recalled, “ . . . Sunday as a day when the slaves were ‘permitted to attend church with their masters to hear the white preacher.’ Susan Epps claimed that, ‘Blacks were preached to every Sunday.’ . . . Margrett Nickerson remembered her master’s meanness of spirit but noted that he would afford the slaves time off on Sundays. With an edge of bitterness, she added, ‘Da overseer would com an’ wake you up an’ make you go to church.’”iv As important as some slave-owners believed religious instruction to be, they did not want slaves reading the Word on their own. Margret Nickerson, recalled that her slave-owner’s wife was their Sunday school teacher who read to them but didn’t “low us to tech a book wid us hands.”v

In the formative years of the state and long after, the white religious establishment in Florida hardly gave more than glancing attention to some of the most vicious and perverted acts of racially-inspired violence in American history. Some white Florida church leaders even rationalized lynching, as God’s wrath against blacks whose lust and brutality sometimes justified the end that was visited upon them. But most southern whites, including religious leaders, were merely silent about anti-black violence in their midst; in so doing they contributed to a moral context that virtually sanctioned white extremists in their use of violence to control and oppress the black population.

Even after slavery, in the most generous of cases blacks were seen as happy, banjo-playing, gospel-singing, promiscuous children incapable of growing up and permanently in need of white supervision. The moral context of the era allowed, and sometimes encouraged, anti-black violence by accepting and promulgating the view that blacks were essentially different beings. For many southern whites, the lynching of blacks was an unfortunate but necessary evil to control their “bestial nature” and to protect whites, especially white women. This was not just a problem in Florida. Although the barbarism of slavery was apparent, none of the churches in states holding slaves did much about it. They were more committed to instilling the notion in the slaves that it was their Christian duty to obey their masters.

Eventually, black ministers and black churches were allowed to emerge in Florida. The first ordained African American minister in Florida was James Page. He was born in Richmond, Virginia, in 1808 as a slave. In about 1838, Colonel John H. Parkhill purchased James and his wife and brought them to Leon County where Parkhill owned Belair Plantation. Page was a gardener and a carriage driver as well as a body servant to his owner. Parkhill influenced Page to take up the ministry. In 1851, at Newport, Florida, a white Baptist minister ordained James Page as Florida’s first and only African American minister. After his ordination, John Parkhill gave him land for the Bethlehem Missionary Baptist Church of Belair, Florida; this was the first regularly organized black church in Florida. Following the Civil War, Page organized the Bethel Baptist Church in Tallahassee.

Today, most African Americans are Baptists or Methodists. This is no accident. Although a smaller number of blacks do belong to the Roman Catholic, Presbyterian and Episcopal faiths, blacks joined the churches that were attended by their owners, and in the South, that meant Baptist or Methodist. As slaves were eventually allowed to establish churches of their own, the slave-masters or white landowners determined who was allowed to preach on their property. As white churches became established in early Florida settlements, many of them allowed blacks to join their congregations although there were specific limitations placed upon their participation.

Some white Florida churches today had founding members who were slaves. Among the largest of these is the venerable Bethel Baptist Institutional Church in Jacksonville which was established in 1838 by four whites and two blacks. The congregation later split along racial lines. Today Bethel Baptist is one of the state’s oldest and grandest black churches, occupying a huge section of downtown Jacksonville. It became a rallying point for blacks as they sought social and economic justice in Jacksonville. Even though blacks were allowed to become members of white churches, they were usually not able to participate as first class members. The churches were no different than other white dominated institutions. Even though black involvement was significant in the establishment of white churches, blacks were kept away from the real levers of power within the church. For example, blacks were not allowed to participate in decisions involving money or to serve on committees with whites. 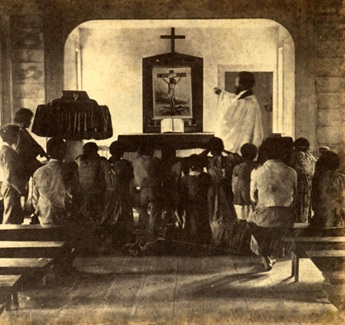 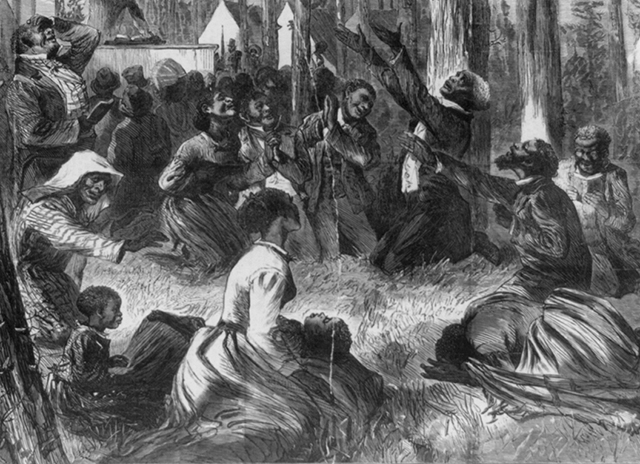 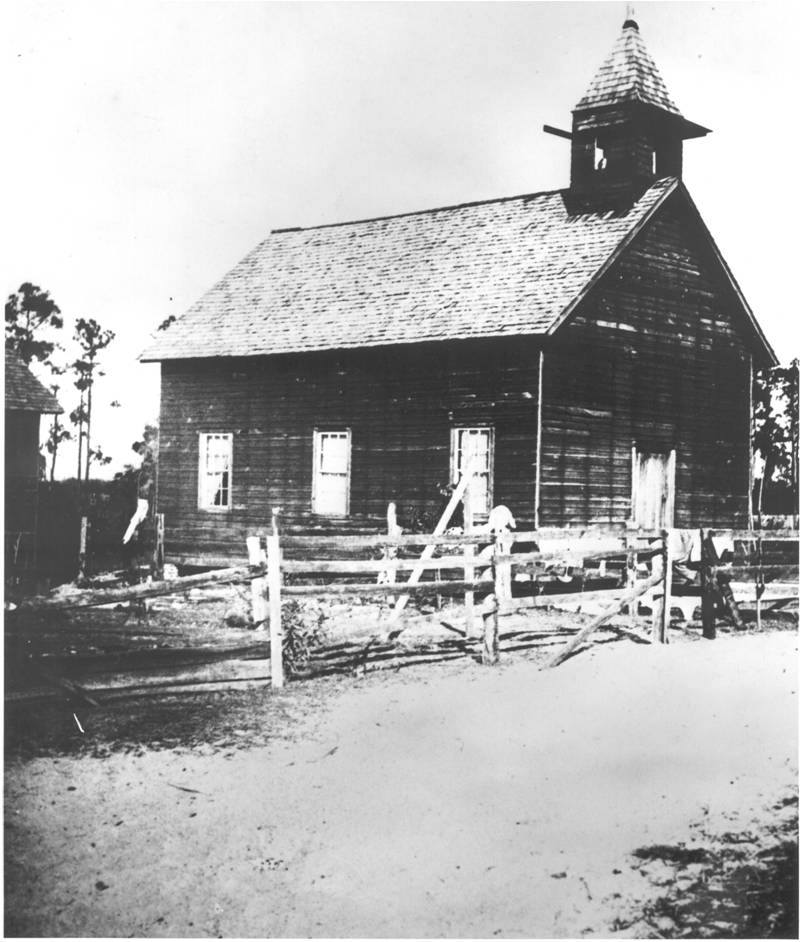 The First Baptist Church of Egypt in Eustis is one of the oldest black churches in Florida . 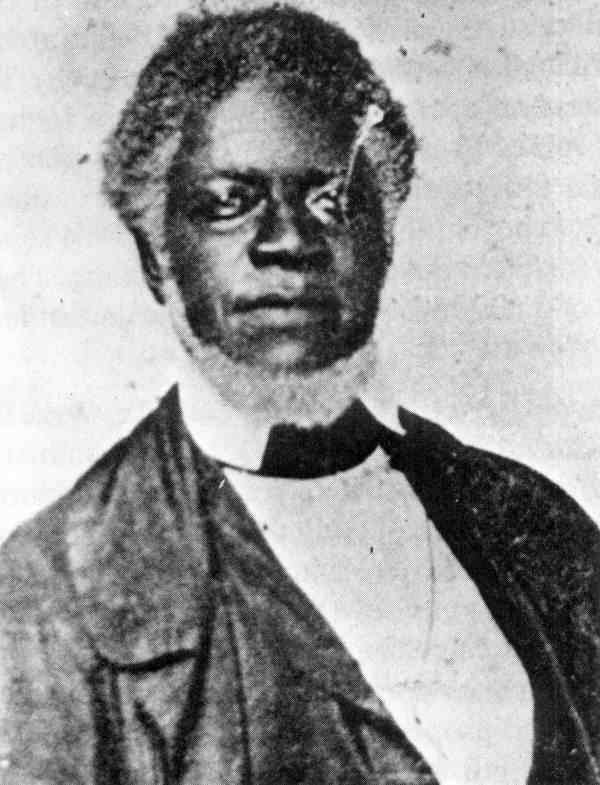 Reverend James Paage was freed by his owner in 1851 and became the first ordained black minister in Florida. 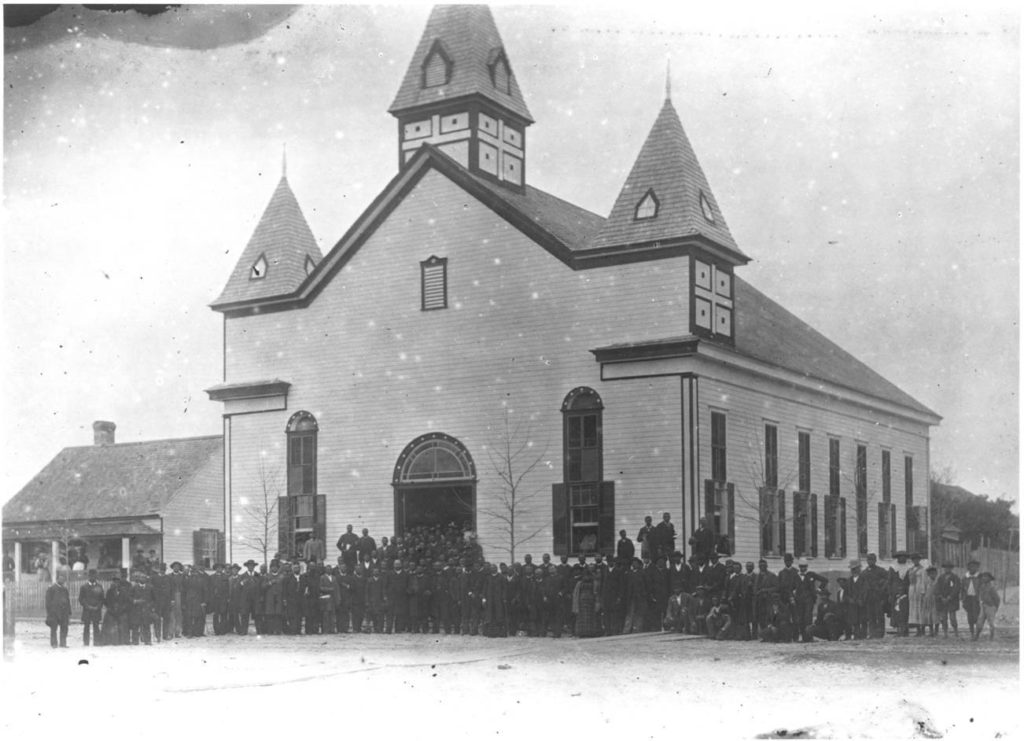 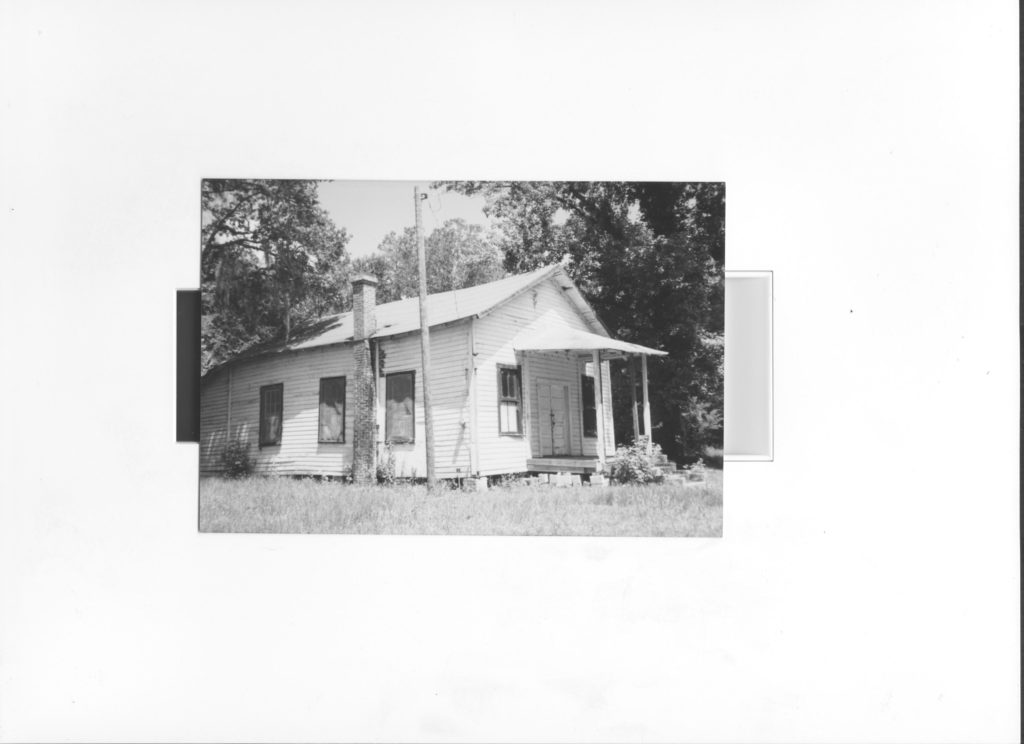 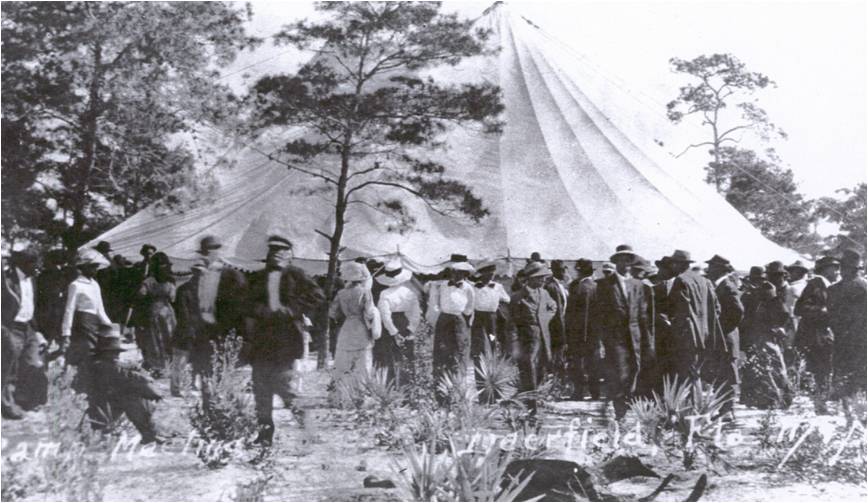 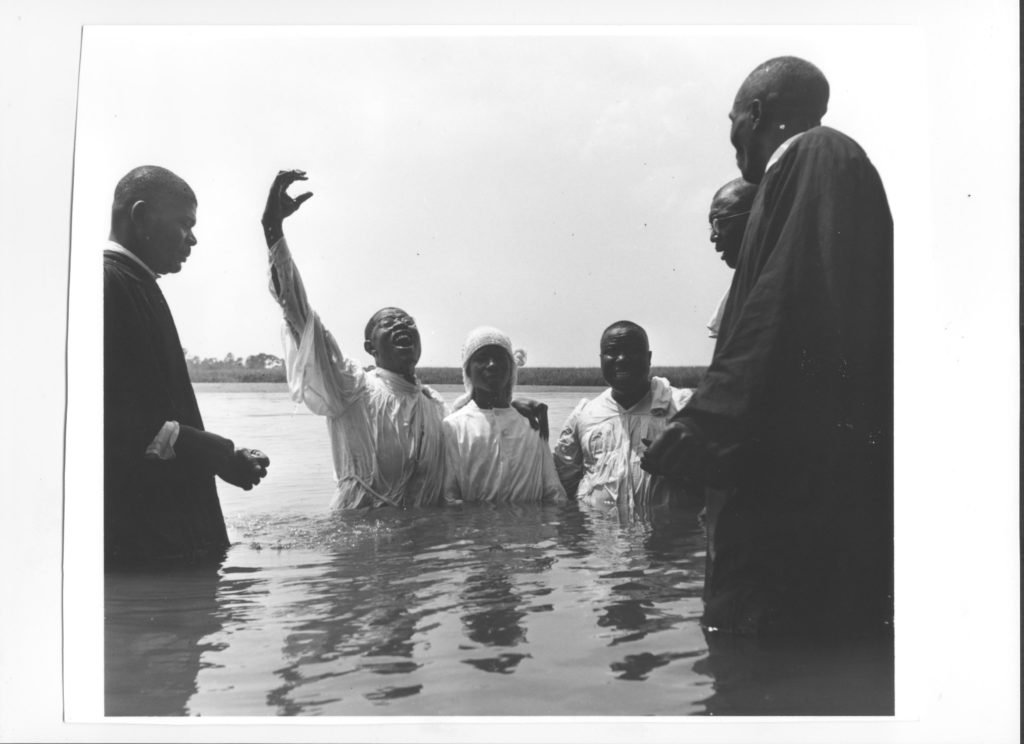 A baptism in Florida. 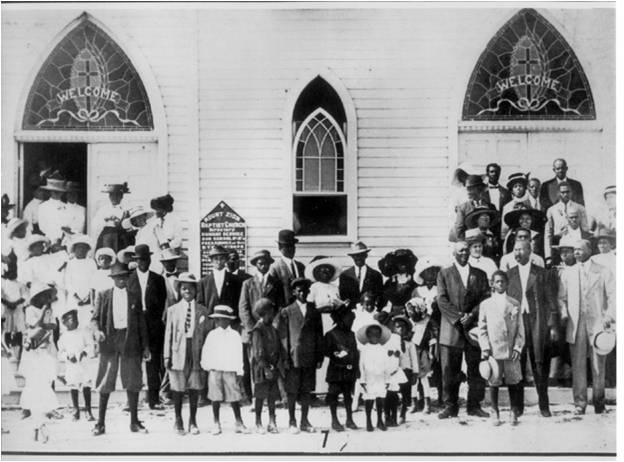