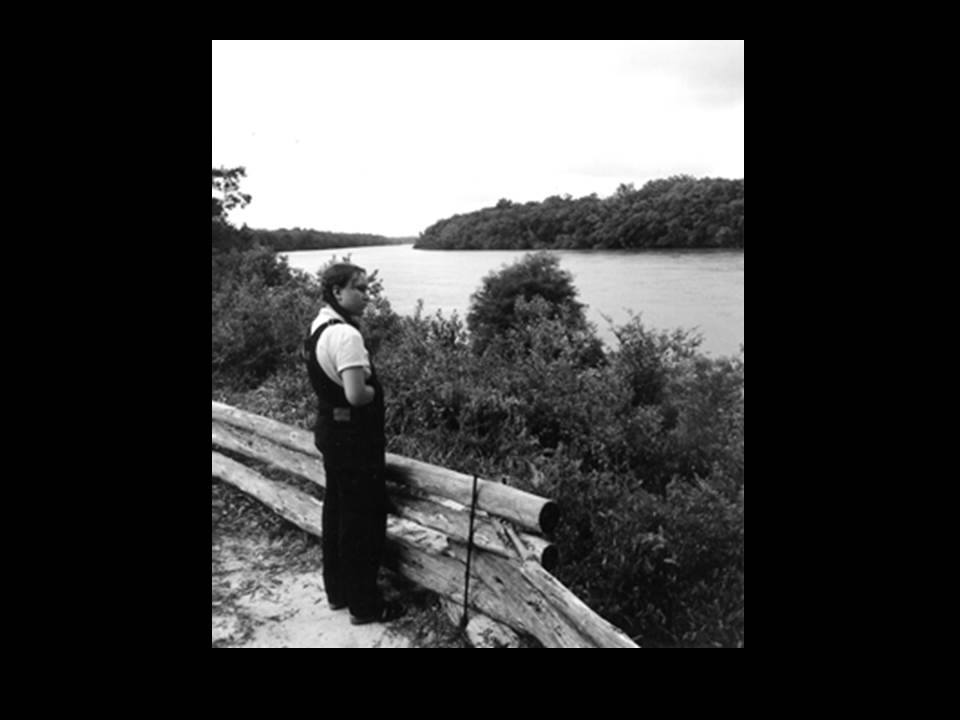 A girl standing on Prospect Bluff where the single cannon was placed overlooking the Appalachicola River.

The Destruction of Negro Fort (1816) by Marvin Dunn

In 1814, even though Florida was still under the control of Spain, the British, still angry from losing their colonies to America and now being expelled to the Bahama Islands, sent military incursions into Florida. “In May 1814, His Majesty’s warship Orpheus, commanded by Captain Hugh Pigot, anchored at the mouth of the Apalachicola River. Lieutenant George Woodbine, . . . went ashore with a small command. He had been commissioned to recruit the area’s many fugitive Creeks and blacks for British service by providing them with food and weapons.”i

Negro Fort was actually built and supplied by Major Edward Nichols. While at the fort, he trained and armed about 3,000 Indians and 300 blacks. The Americans were incensed particularly at the British for encouraging escaped black slaves, Seminoles, and Choctaw Indians to help in the building and settling of the fort. As many as 200 blacks, nearly one-half the slave population of Pensacola, moved to Negro Fort.

By 1815, there were at least 800 blacks living at the fort and in the adjacent countryside. The settlers farmed the rich land along the river, spreading themselves out for miles along both banks. According to a Georgia newspaper, the Savannah Sound, fugitives from as far away as Tennessee and the Mississippi Territory sought refuge at Negro Fort. The fort itself was used as a place of safety during threats to the community. There were two leaders, one a Choctaw chief, the other a black man called Garcia or Garson. There was no clear evidence that the inhabitants of the fort ever fired upon American ships. Blacks and Indians no doubt ventured into Georgia on raids, and in some instances slaves certainly returned to the fort with them. This alone was enough to doom the inhabitants of Negro Fort.

As matters heated up, Major General Andrew Jackson, who commanded military forces in the region for the new American government, began operations against the Indian and black populations in north Florida, destroying many communities even though Florida was still under Spanish ownership. Ruthless and racist in his approach, Jackson hunted down and killed many Indians and blacks in the Suwannee River region. But while rousting blacks and Indians all over north Florida, Jackson avoided direct conflict with the Spanish at St. Augustine, Pensacola, and St. Marks, Spain’s only strongholds in Florida. Spain was now trying to get out of Florida and made no real threat to Jackson’s Florida operations.

England, on the other hand, having lost her colonies to the United States and with interests in the Caribbean, such as the Bahama Islands, was actively recruiting and arming Indians and blacks to resist American intrusion into Spanish Florida. The British were determined to do all that they could to visit havoc upon white settlers across the Florida border in Georgia. Once they were recruited and armed, these former slaves and Indians were deployed into the Florida interior and sent to raid slave plantations in Georgia. The establishment of Negro Fort on Prospect Bluff was a product of this British strategy. Once the fort was established, the British departed. However, they left the garrison heavily armed with a magazine full of weapons and ammunition. There was also a single cannon mounted atop the bluff overlooking the river.

Border conflicts escalated between the Indians and blacks and the Georgia planters, who continued to vehemently argue that their slaves were running away to join the blacks living near Negro Fort. The slave-owners pressed the American government to do something about it, and that something was a direct attack on Negro Fort. Only two years after its establishment, the fort was destroyed by American gunboats under the command of General Edmund P. Gaines, the man for whom Gainesville, Florida is named. “Early on the morning of July 27, the American vessels came within range of the Negro Fort. After being shelled, the sailors returned fire, but the shots from their light weapons sank harmlessly into the post’s thick walls. In turn, balls from the blacks’ heavy cannon, manned by inexperienced artillerists, whistled harmlessly overhead or splashed into the muddy Apalachicola.”ii

Then disaster! The ninth cannon ball, a practice shot, really, from one of the gunboats, heated red-hot in the cook’s galley, penetrated the fort’s magazine where ammunition and weapons were stored. The explosion was spectacular, killing over 300 people instantly. The remains of some of the victims were actually launched into the treetops where they hung for weeks in the white-hot summer sky, closely attended by hordes of vultures. Only about 50 people survived the explosion, and many of them died later of severe injuries. The dead included Indians who assisted in the defense of the fort and many women and children who had fled to the fort at the onset of hostilities.

The fort’s leader, Garson, was captured and shot. The Choctaw chief who had helped defend the fort was scalped.iii Many of the blacks who did survive were eventually captured by American troops and returned to their owners. The destruction of Negro Fort inflamed relations between the Indians and blacks and the United States government. It led to the First Seminole War (1815 to 1819) which began about a year after the American attack on the fort. Raids by Seminoles and blacks against white settlers along the border continued as did Georgian counter-raids against black and Indian towns in Florida.

In 1818, Major General Andrew Jackson marched into Pensacola, established military garrisons and seized Spanish property. On his way into Pensacola, he stumbled upon the remains of Negro Fort. Impressed by the strategic location atop Prospect Bluff, he instructed Lieutenant James Gadsden to build a fortification there to serve as a supply base for his operations in north Florida. Jackson renamed the site Fort Gadsden, and Lieutenant Gadsden maintained the fort until Florida was ceded to the United States three years later.

Today, Fort Gadsden is listed as a national historic site. Sitting high above the river among soaring yellow pines and enormous live oak trees dripping with moss, it is a remote, quiet, rarely visited, very beautiful place. The original earthworks of the old fort can still be seen. Behind the old fort, along a winding path through the pinewoods, lies the Renegade Cemetery where the victims of the 1816 attack were buried in unmarked plots, many of them child-sized.

As a direct result of these and other conflicts around Florida, blacks and Seminoles were scattered throughout the Tampa Bay area in the early 1800s. The destruction of Negro Fort displaced 1,300 escaped slaves, maroons and Seminoles many of whom are believed to have relocated to the Tampa Bay area. The Indian and black uprisings in northern Florida were eventually put down, and with the signing of the Adams-Onis Treaty in 1819, Spain was ultimately forced to turn Florida over to the United States in 1821.

In Pensacola, on July 17, 1821, Major General Andrew Jackson took control of Florida from Spain, for the United States of America. Jackson also accepted President James Monroe’s offer to become the first American governor of Florida. This was a moment of triumph for Jackson who had led the campaign to rid Florida of foreign domination. Later, the city of Jacksonville would be named for him, and he would go on to become President of the United States.

The floodgates were now open for the white settlement of the new territory. When Florida became a United States territory, almost all the blacks that had been living in Spanish cities departed with the Spanish for Cuba and other Spanish areas. Some also went to the black republic of Haiti where whites had been removed from power. Those remaining were maroons, Black Seminoles, a few free blacks, and many escaped slaves. Now, the Americans would have to deal with the vexing problem of hostile and armed Seminoles and blacks living free in wilderness Florida. 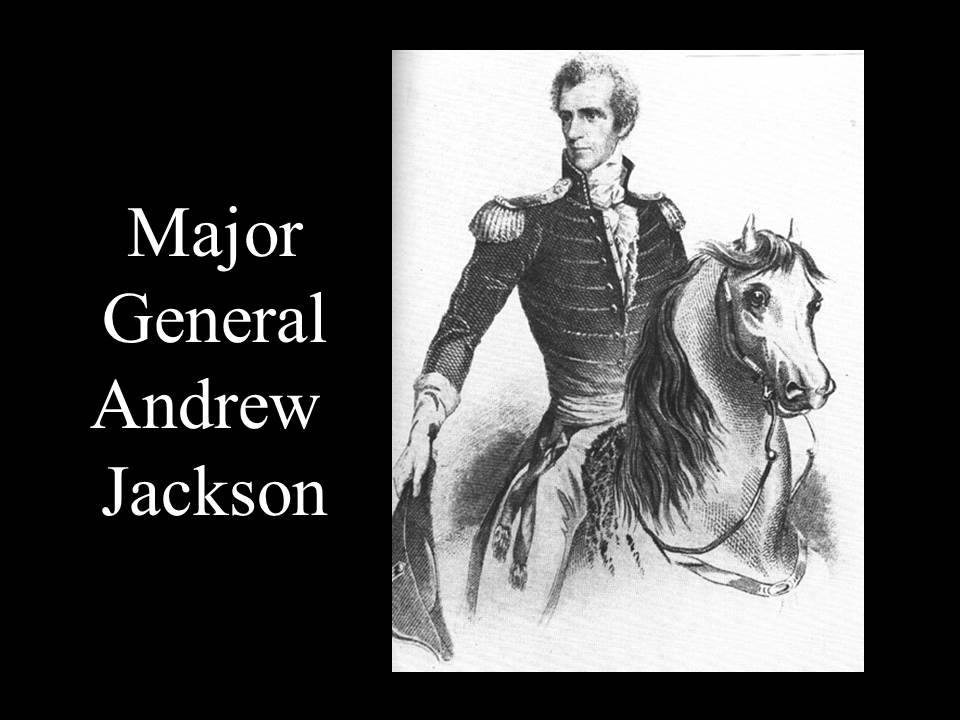 Andrew Jackson sent troops and gunboats to attack the Negro Fort. The American government could not allow hostiles to control Prospect Bluff. 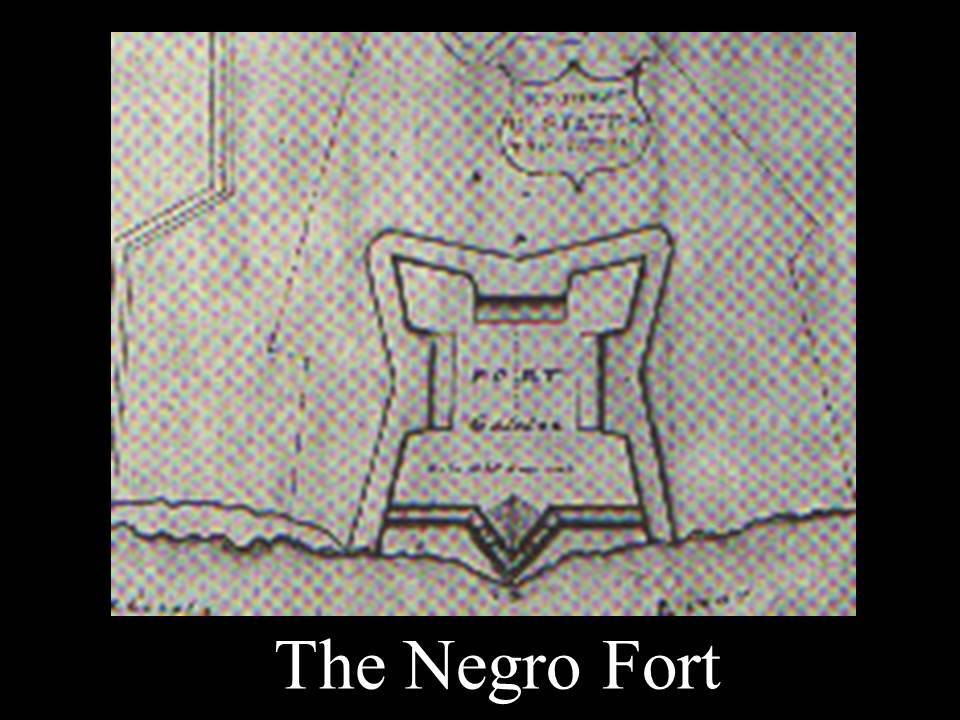 A drawing of the Negro Fort. Notice the cannon placement directly on the river. The ammunition stores were in the rear of the fort on the right. 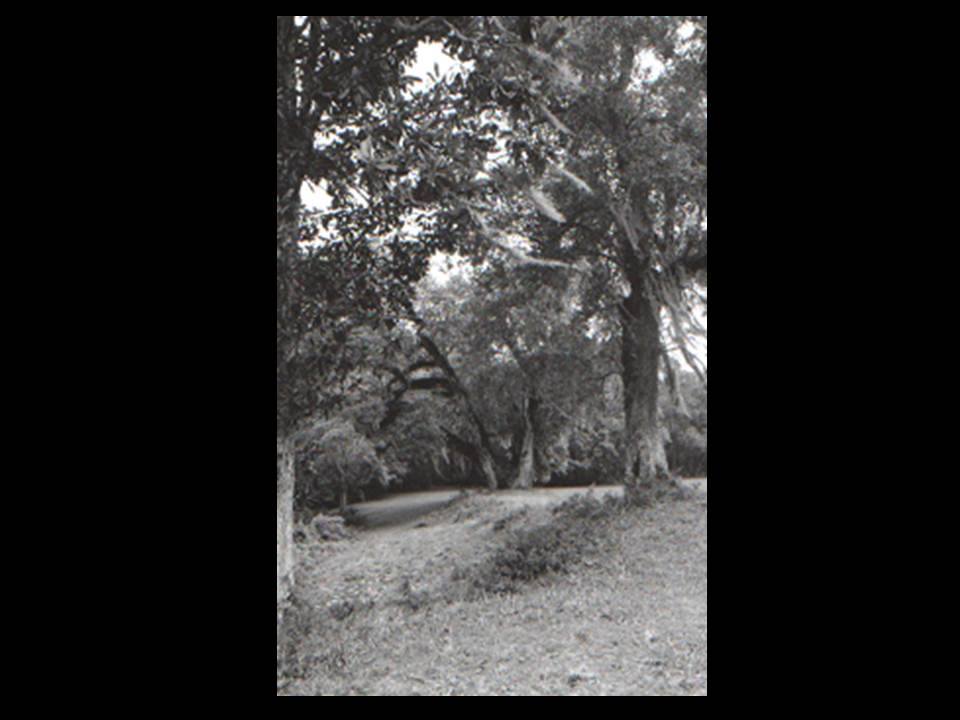 Whats left a wall at Negro Fort which was constructed of logs and earth on three sides. The fourth side faced the river. 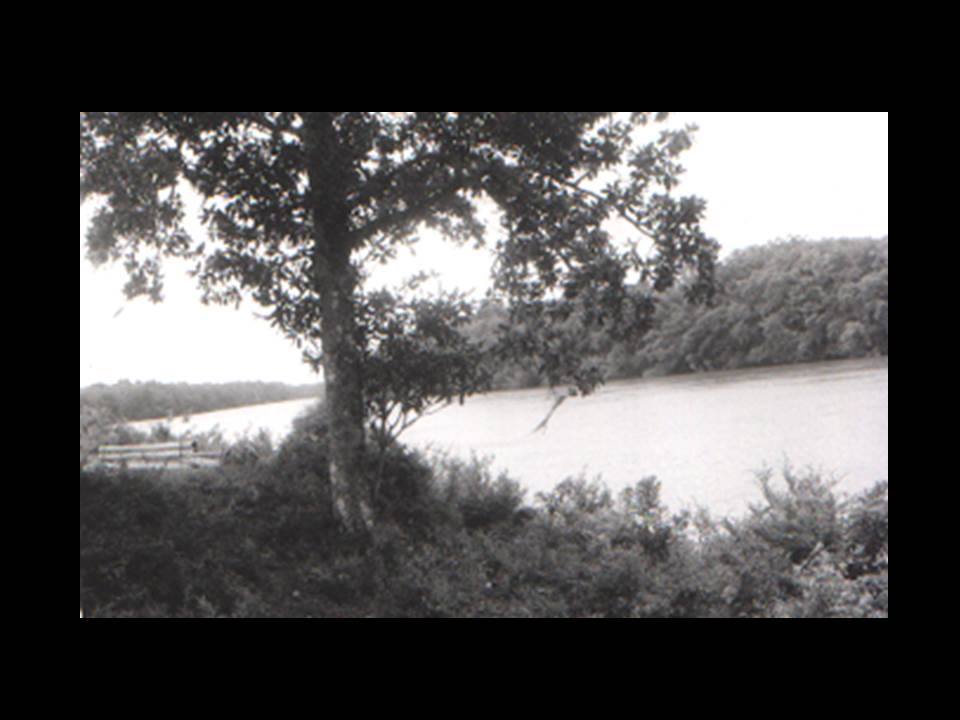 The gunboats approached the fort from the south stopping some distance away to take practice shots. Hundreds of people huddle together inside the fort including women and children. 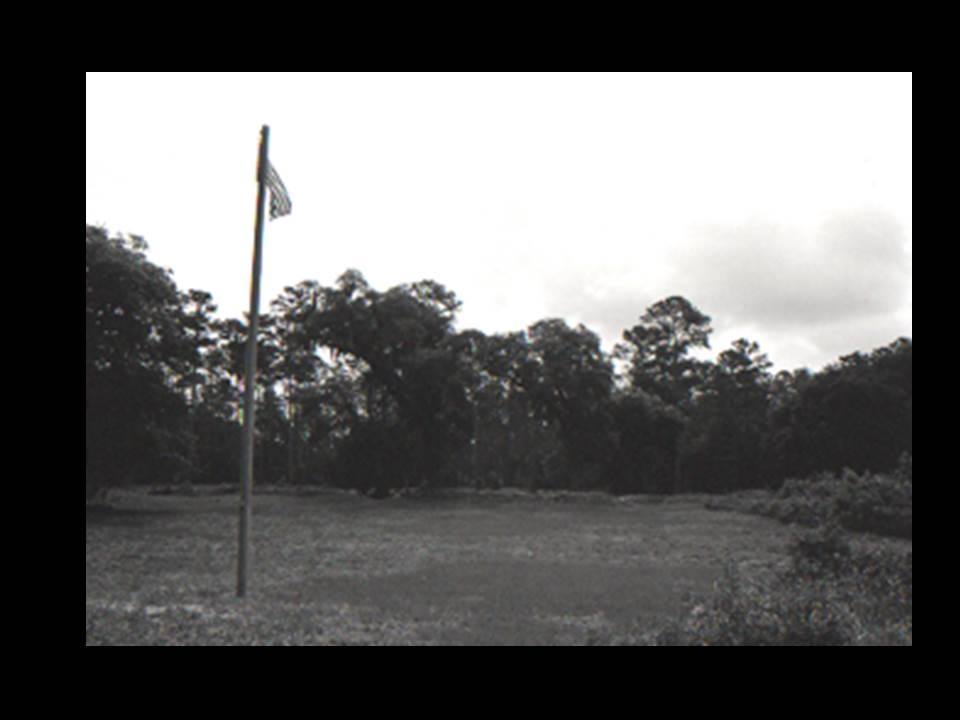 The flag marks the spot where the ammunition stores were kept and where the ninth practice round from one of the gunboats struck. The explosion killed hundreds of people. 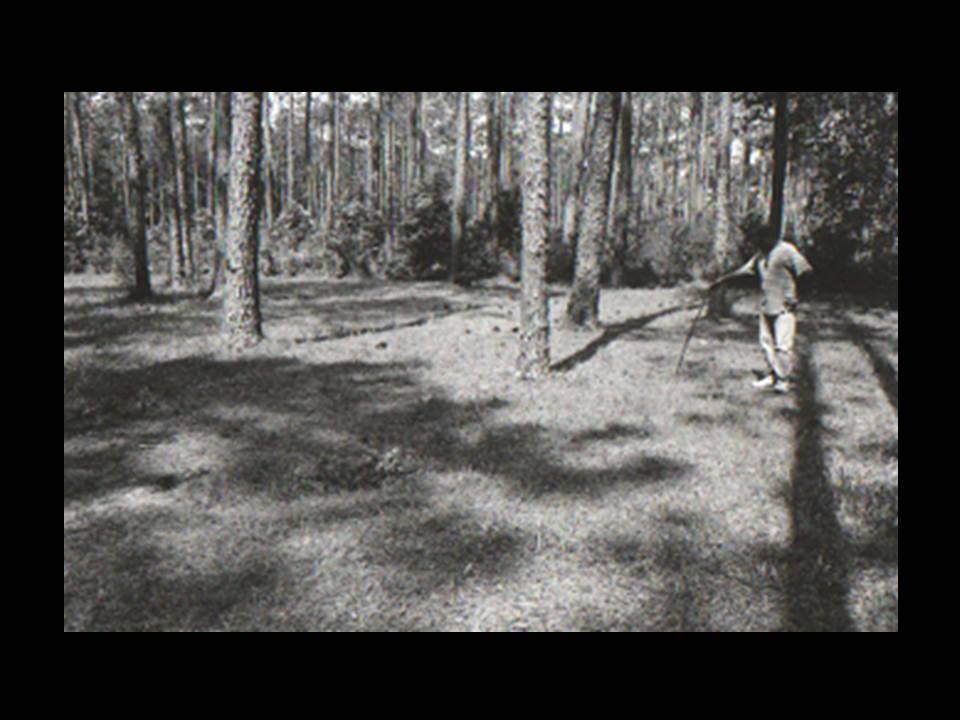 Marvinn Dunn at the Renegade Cementery behind Negro Fort. Where many of the victims were burried, some in a mass grave. 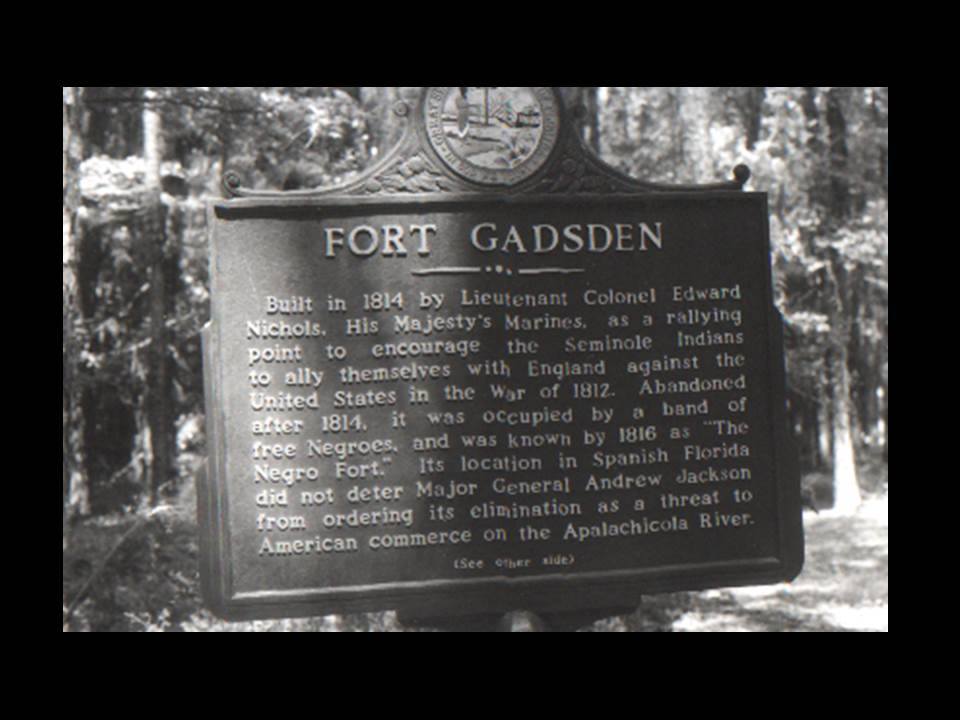 Negro Fort is now called Fort Gadsden. Scant mention is made of the slaughter that happened here. 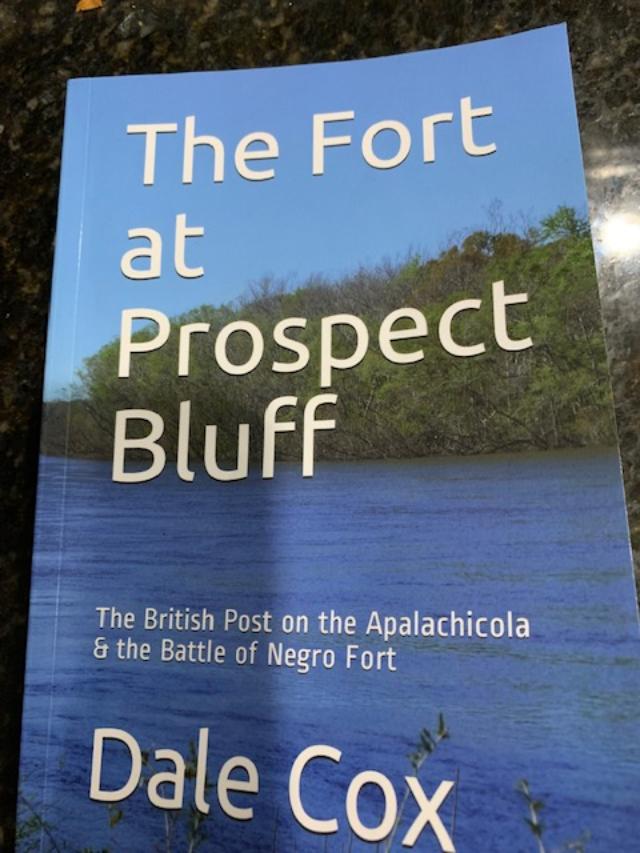