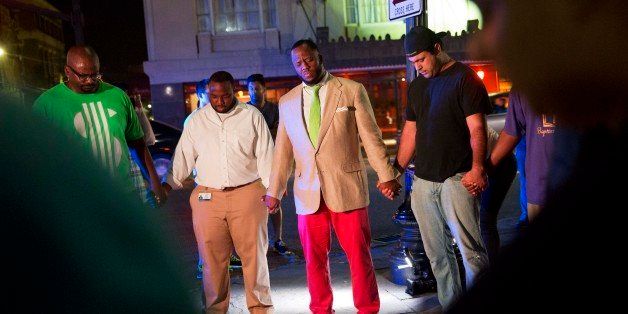 Worshippers gather to pray down the street from the Emanuel AME Church following a shooting Wednesday, June 17, 2015, in Charleston, S.C. (AP Photo/David Goldman)

“I have to do it. You rape our women and you’re taking over our country. And you have to go.”

These are the words the Charleston shooter reportedly spoke during Wednesday night’s massacre, according to Sylvia Johnson, a woman who told NBC News she spoke to a survivor of the Charleston shooting. Johnson is a cousin of pastor and state Sen. Clementa Pinckney, who was killed Wednesday night at Emanuel African Methodist Episcopal Church. Nine people were murdered in the house of worship in cold blood — three men and six women.

We have yet to hear from the survivors of the attack directly, so there are a lot of unknowns. We can’t be sure of the exact words the shooter used while he was carrying out the massacre, or the exact meaning behind them. But if Johnson’s account is accurate, there is a disturbing historical context for the sentiments expressed.

A white man committed horrific acts of violence — domestic terrorism, a hate crime — against black men and women. He allegedly used the “protection” of white women and their sexuality as the reason behind it. It appears to be toxic white masculinity at its worst.

As Feministing columnist Choe Angyal pointed out on Twitter, this narrative is not new:

“You rape our women and you’re taking over our country.” OUR women. White women. Racist violence in the name of white womanhood, yet again.

The sentiment that black men rape white women more often than white men do is patently false, but it’s one that carries historical significance. The United States has a storied history of white female sexuality being used as a justification for racist acts of violence.

In the late 1800s, the idea that black men were innately driven to rape white women was often used to justify the lynching of black men. In 1923, the Rosewood massacre in central Florida was launched based on the rumor that a white woman had been sexually assaulted by a black man. In 1955, 14-year-old Emmett Till was murdered by two white men for supposedly flirting with a white female grocery store cashier.

As Jamelle Bouie wrote for Slate: “Make any list of anti-black terrorism in the United States, and you’ll also have a list of attacks justified by the specter of black rape.”

Dr. Lisa Lindquist-Dorr, associate professor at the University of Alabama, spoke to The Huffington Post about the historical potency of this particular sexual trope.

“It was a racial red herring that would be brought up to justify violence or legal tactics to oppress African Americans,” she said. “One that wasn’t based in reality. It’s a trope that’s trotted out to justify oppression.”

In her book White Women, Rape, and the Power of Race in Virginia, 1900-1960, Lindquist-Dorr explained the rape myth that dominated white, Southern culture. “The myth insisted that black men were driven to assault white women and that, as a deterrent, ‘black beast rapists’ should pay with their lives,” she wrote.

The trope was a particularly effective one because of the way white female sexuality has historically been viewed and positioned. “Sexual access to women is a trophy of power,” Lindquist-Dorr told HuffPost. “White women embodied virtue and morality, they signified whiteness and white superiority, so sexual access to white women was possessing the ultimate privilege that white men held. It [also] makes women trophies to be traded among men.”

If the Charleston shooter’s comments are any indication, these sentiments are still depressingly ingrained in our culture. White women’s bodies are still used to explain away the destruction of black bodies and lives — both male and female.

Some white allies are already speaking out on social media to make it abundantly clear that white women will not stand for violent hate crimes being justified in our names.

#CharlestonShooting suspect allegedly said “You Rape Our Women” during the shooting which signals deep-seated sense of entitlement.

“They rape our women”.. anyone picking up on the misogynistic “white male entitelement” element yet? #CharlestonShooting

White women don’t need the protection of hateful, angry, violent white men. If anything, we all need protection from them.