The Media as Oppressor by Dr. Marvin Dunn

(From “A History of Florida Through Black Eyes”)

Newspapers, then and now, help to set the moral tone of their communities. A century ago, most southern newspaper editors were racists or apologists for racists, and their bias was reflected on the pages of their editions. Even though powerful newspaper editors and public officials sometimes railed against vigilantism and espoused their belief in the rule of law, they also tended to see lynching as a necessary evil in response to perceived violence by blacks. This was so especially if it involved a sexual attack on a white woman by a black man. Newspapers reinforced the broad view that blacks were lusting beasts. “Like other late-nineteenth-century Southerners, white Floridians believed that blacks were prone to sudden, unprovoked bursts of violence and that such behavior posed a growing threat to social order-particularly to the safety of white women.”i

An example of press excess that fed anti-black violence in the South can be seen in this editorial from a Memphis newspaper following the Civil War. Many Florida newspapers published similar sentiments:

No man can leave his family at night without the dread that some roving Negro ruffian is watching and waiting for this opportunity. The swift punishment which invariably follows these horrible crimes doubtless acts as a deterring effect upon the Negroes in that immediate neighborhood for a short time. But the lesson is not widely learned nor long remembered. . . The facts of the crime appear to appeal more to the Negro’s lustful imagination than the facts of the punishment do (sic) to his fears. He sets aside all fear of death in any form when opportunity is found for the gratification of his bestial desires. . . . The generation of Negroes which have grown up since the war have lost in large measure the traditional and wholesome awe of the white race which kept the Negroes in subjugation, even when their masters were in the army, and their families left unprotected except by the slaves themselves. There is no longer a restraint upon the brute passion of the Negro. The Negro as a political factor can be controlled. But neither laws nor lynchings can subdue his lusts.ii

In some cases involving an alleged attack by a black on a white woman, the media practically offered the rope to the mobs. Such an offense was considered by some papers to be an unpardonable crime. The Florida Times-Union of Jacksonville lectured: ‘In the South, ever since the emancipation of the Negroes there have been occasional instances of summary punishment meted out to men of the colored race who perhaps inherited the savagery of their ancestors and defied all laws.’”iii

In 1903, the Miami Metropolis, that city’s first newspaper, actually urged whites to treat a black man who was accused of rape to a “necktie party”. In 1903 Richard Dedwilley, a black man, was accused of raping a white woman. After describing Dedwilley as a fiendish black brute, the newspaper had a suggestion:

All kinds of remedies have been resorted to including hemp, tar and torch, and yet it seems that it is all of no avail . . . and occasionally the demon in human form breaks loose, fearing neither God nor man, bent upon the commission of a crime worse than the foulest murder. For such beings no punishment is mete. No wonder that lynchings and roastings are resorted to and such things will continue to take place North and South, East and West as long as these devilish attempts upon the virtue and lives of white women are made. If white men of Miami had gotten their hands upon him they would have made short work of putting out his worse than worthless life. iv

Dedwilley was subjected to a legal lynching; that is to say, one in which a trial is held but the result is but a forgone conclusion. After a trial that lasted only fifteen minutes, he was hanged in the yard of the county jail within the same month that the crime was committed.

Newspapers automatically took the side of whites and assumed blacks to be guilty, just as a result of being accused. In 1949 during the Groveland incident, the Orlando Morning Sentinel ran a story in which an artist’s rendering showed the four accused black men strapped into electric chairs.v Often newspapers rationalized anti-black violence by blaming the victim for causing white men to have to take the law into their own hands. Even as newspapers became more critical of lynchings, they appeared to be more concerned about protecting the image of their communities than they were about justice for the victims who were lynched. For most southern newspapers during the lynching era, the roasting of live human beings, with a cheering crowd of bystanders watching, might have been necessary given what the Negro had done but it made the community look bad in the eyes of the outside world.

Arthur Raper, a white historian who has written extensively about race, noted that the black press chose sides too: “Whereas the Negro press in practically every case assumed that the person lynched was innocent, or that he was guilty of some crime less serious than that of which he was accused, the white press usually accepted as true all the rumored details of guilt. This tended on both sides to accentuate racial fear and antagonism. Both the white and Negro press could render a greater service by carefully confining their reports to facts.”vi Although his point should be well taken, it is worth noting that the black press did not incite blacks to give “necktie parties” to whites. It did not incite racial violence in response to the lynching of thousands of blacks in the South. The black press did not print racist cartoons depicting whites as fools. The black press did not run scores of editorials asserting that whites were inferior to blacks or suggesting that whites were too dumb to be given the privilege of voting. 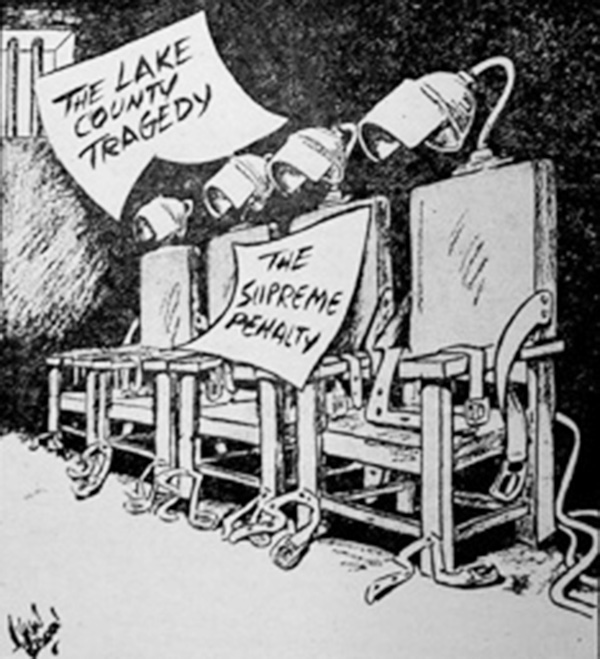 The Orlando Senitel published this cartoon before the Groveland Four were tried suggesting they should be executed.

Newspaper announcing a lynching in advance.

Newspaper predicting Claud Neal would be lynched was seen around the nation yet the lynching took place anyway. 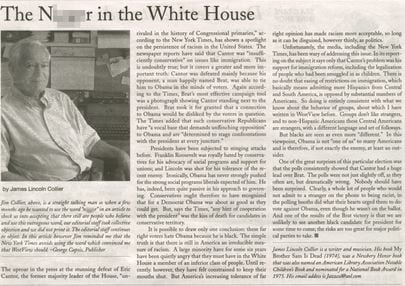 nigger in the white house