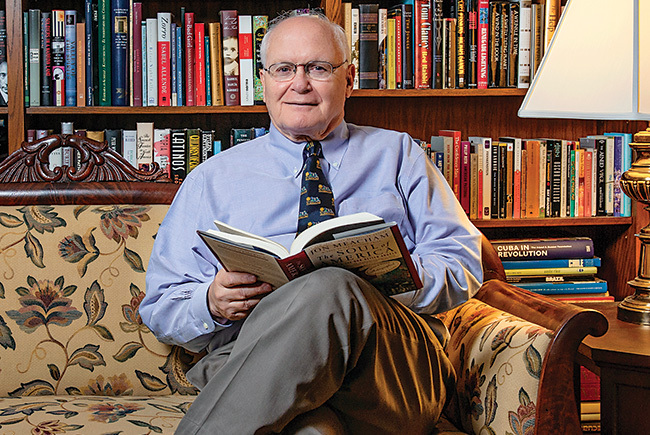 Here I am: Optimistic-idealistic. Grew up on a farm. Driving a tractor by age 10. One of 9 children. Farm went broke. Moved to Florida. Total product of public schools-university. Dinner with Queen Elizabeth, met every President from Nixon through Biden, interviewed Fidel Castro for 5 ½ hours, traveled to 56 countries; interviewed child rape victims in the eastern part of the Democratic Republic of Congo…discussed microlending with villagers in Bangladesh…went with a Mengele experimented-upon twin to Auschwitz. Read two or more books a week, mostly history and biographies.

How different our lives are. (Or perhaps not so much, and that is what I want to explore that this morning.) Whichever the case, what might I possibly say to you today that would be meaningful? You are the toughest sort of audience for me. Most of you in your teens, and I will be 80 years old in six weeks and a few days more. You are close to the beginning of life; I am close to the end. What time do I have left? How much time do you have left? How will each of us use that time? I think of what Horace Mann, more or less the “inventor” of the American public school system, had to say back in 1859 just before the dawn and the nightmare of the Civil War: “Be ashamed to die before you have won some battle for humanity,” he told the graduating class of Antioch College.

The best stories in human history are of people who made a difference for others. You can be among them.

Nothing I will say this morning is complicated. All the most important things in life are “simple” in their own way. What has worked for me will work for you and your children and grandchildren. Yes, I know you and I have grown up in quite different times – yours accompanied by the Internet and social media and other items not even imagined when I was your age. Yet the basics remain the same: That is, if you have good and basic values – if you work hard to be fair, if you truly care about other people, if your life is measured by the difference you make for others, if you are a genuine lifelong learner – then your life is going to be accompanied by frequent moments of genuine joy brought to be by the difference you made in other lives.

Your best opportunity for your most meaningful future will depend on how devoted you will be to lifelong learning. You have so much to read and learn now; indeed, you are required to do so. But when you get to be my age, maybe a half-century and more past your classroom years, will you continue to listen and learn and read and observe closely and grow? John Wooden, a coach for life’s greatest lessons, told us: “You should learn as if you were going to live forever, and live as if you were going to die tomorrow.” Einstein told us: “When you stop learning, you start dying.”

Now, there is no denying the quality of Ransom Everglades. To attend this place fits the definition of very best. To go here is a privilege, even if that word might never come to mind. You are, in fact, privileged people. You have the privilege to participate in an expensive place that emphasizes and enhances your opportunity to build a great and giving future. Meanwhile, you and I have the privilege of living in an exceptional nation with aspirations for greatness and the opportunity, as yet unfulfilled, to make this republic a land of opportunity for everyone. What makes this republic “exceptional” is not having more billionaires than any other country (or more weapons), but that we have wanted to be a “good people,” and so often have been. Yes, history does remind us that we have been complicit in many bad things, even evil – slavery, genocide of Native Americans, the Chinese Exclusion Act of 1882, the discriminatory immigration act of 1924, the imprisonment of 110,000 Japanese Americans in World War II, the overthrowing of legitimately chosen leaders in such places as Iran, Congo, Guatemala and more. Nonetheless, with fits and starts, we continue to make progress toward being even better people living in an ever more just land. The “promised land” for what we can be requires still more, much more, from each of us.

Paul Ransom, gone now for more than a century and the visionary behind this school and its great values, told students that those he admired most were those who “do not shirk the great problems of life, but meet and solve them.” That is you; that needs to be you.

The best of us learn, and face up to, the facts — even and especially those facts that make us uncomfortable. In that spirit this morning, I tackle the word “privilege” – a concept much under siege these days. I want you to listen to me carefully as I explain that word for myself, and for you. Nothing I say should make you uptight. We are gathered here this morning in the memory and spirit of Dr. King who brought people together even as he shared hard and great truths. I try to do the same.

Dr. King told us: “The arc of the moral universe is long, but it bends toward justice.” The story of history is the struggle for justice. No social progress in history ever came to be, or will ever come to be, without insistent struggle, as Frederick Douglass reminded us more than a century and a half ago. In our own country, examples abound of progress achieved – in civil rights, women’s rights, gay rights, Social Security, Medicare, and much more. None came easily. Those who struggled for justice were often ridiculed and manacled, marginalized, hosed with water cannons, shot and died.

To tell you the truth, I don’t like to be called “privileged,” but I am. You are, too. You have, for one example, the privilege of going to a special place that costs beyond $40,000 every year – far more than one of Florida’s fine public universities. You have splendid teachers and an administration of excellence. Meanwhile, in the spirit of discussing that word “privilege,” the wisest among us will acknowledge that, yes, there is something real known as “white privilege” – even if I, even if we, never felt privileged. Yes, I paid my own way through college, as did each of my eight brothers and sisters. Yes, I can remember a childhood when we sometimes had sandwiches made from sugar and butter. But did I ever really have to think about my own skin color as a potential deficit of any sort? No. Have I ever had to worry about being racially profiled? No. Did I grow up with two parents who had dinner with us every evening accompanied by a discussion about what happened at school and in the country and the world? I did. Have I been more blessed financially and educationally than others? I have been. Am I a “racist”? Is any of us? That is a tougher question. But you will see evidence and answers everywhere. Here, for instance, is a quotation from the author, spiritual counselor and presidential candidate Marianne Williamson from Sunday’s New York Times: “I do not believe the average American is racist,” she writes, “but I do believe the average American does not truly realize how tilted our public resources are away from American black citizens and in the direction of America’s richer white families.“ Then she says: “We do not have in America today a consensus that there is even a debt to be paid. What is this in our national temperament? Why is it that we resist the recognition of the tremendous moral debt we owe to a people brought here against their will and enslaved for centuries?”

For 40 years I have been a “life member” of the NAACP. I have been honored nationally for leadership in hiring and promoting what we call “minorities.” Yet…however thoughtful or sensitive or “progressive I might be, if I told you I know – really “know” – what it is like to be, say, black or gay or a woman or transgender, then you need to be really worried about me because I would be deluding myself. My whole being is optimistic and idealistic, but I cannot ignore facts and reality. It takes very little exploration to discover that racism has been embedded in our nation from its very beginnings. This is not some special condemnation of America; racism is not just an “American” challenge. In all those countries to which I have traveled – countries that ranged from the mostly rich to mostly poor – I have never been anywhere without racism, though it takes many different forms. The only real chance we have to overcome racism is for each us to confront reality and ourselves. (As an important aside, I recommend two recent books – “Caste” by Isabel Wilkerson and “The 1619 Project” by Dr. Nikole Hannah-Jones and others.)

Realizing your privilege, owning up to my own privilege shouldn’t lead either of us to wallow in any “guilt.” But it does underscore my own imperative, and yours, to live our lives through the prism of the best possible values, the best possible examples of caring and respecting others. I am here this morning with the sense that each of you is a good and caring person. I am quite sure you want to do right and good. I want you to be thinkers and doers – people who will contribute to communities and country and charities, and then spend real time and real effort to make opportunity and optimism more real for others.

All this requires real belief in others. If you expect the best from others, the best more likely will show up. The second President Bush warned us of “the soft bigotry of low expectations.” People, most people, want to be good. Help them to be so.

I hope you will believe in what is higher and better than yourself — that is God or however you phrase it. For otherwise, what could be the meaning of life?

Finally, please hear and, I hope, heed these words that I carry in my wallet – the wisdom of Leo Rosten, the Yiddish philosopher and humorist, who wrote: “I cannot believe that the purpose of life is to be “happy’. I think,” he wrote, “the purpose of life is to be useful, to be responsible, to be compassionate. It is, above all, to matter, to count, to stand for something, to have made some difference that you have lived at all.”

To which I say, “Amen.” I believe in you. Please believe in yourself. Believe in what is good and what is possible within everyone. May each in the Ransom Everglades family be always blessed. Thank you.